Double of Remes in Finland!

Double of Remes in Finland!

The three-time world champion imposes himself again on his opponents, Daniel Mundell conquers the second place overall while Erik Willems confirms himself third. 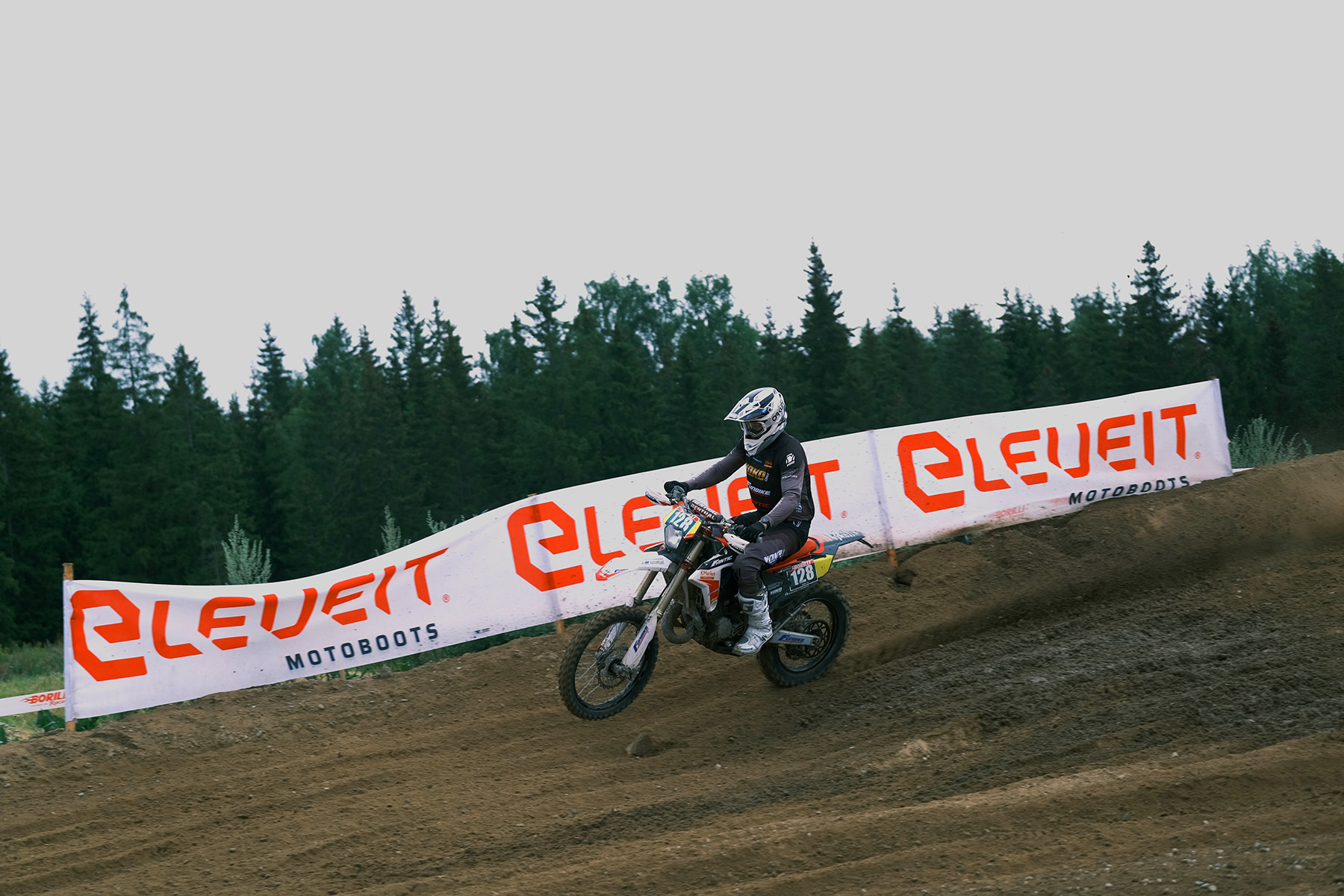 The second Finnish day of the Borilli Enduro European Championship took place on Sunday 24th of July, under a shy sun, which hidden by the clouds gave respite to the drivers who started on time from 9.00. In 24MX Round #3 Day 2 the number of drivers who started decreased compared to day 1, the difficulty of the race forced some participants to withdraw; the structure of the race also changed; the number of laps was, in fact, reduced to 2 and a half. The race direction, together with Track Inspector Gionni Fossati, decided not to have the second transfer loop and the 24MX Extreme Test at the end of the third lap. The race saw, therefore, its conclusion within the Eleveit Enduro Test. This change affected all classes except for Women, who made only two laps of the race. Despite the changes made on this second day of the race, it came out to be just as complex and difficult as the previous one. The rains of the night made the first passage slightly, slimy and more complex, especially in the 24MX Extreme Test and in some parts of the transfer. The special tests were excavated considerably with the passages of the previous day; the soft bottom of the ground brought out numerous canals, roots and stones that added a further element of difficulty to an already complex Round. No changes were made to the special stages, which were travelled in their entirety also in this second Finnish event. 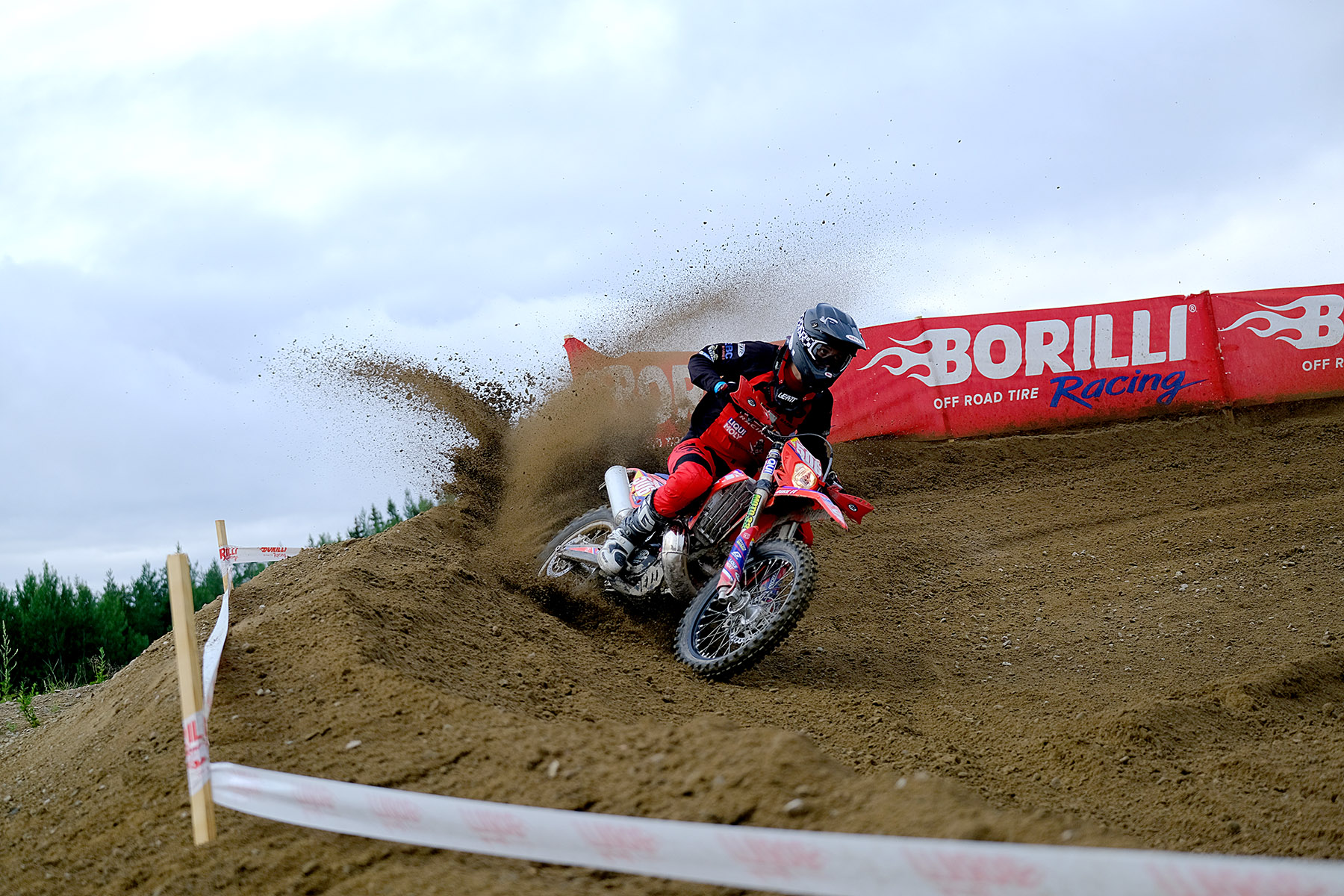 Eero Remes repeated himself and won the overall class for the second time; also on this occasion the three-time world champion confirmed himself as the best interpreter of the special stages. Although the 24MX Extreme Test put him in slight difficulty forcing him to push his TM, he still managed to climb the top step of the podium. A weekend full of successes and satisfactions that adds to the long list of triumphs of this incredible talent made in Finland! Daniel Mundell, after a sad withdrawal on day 1, takes a well-deserved payback! The Englishman had a first lap characterised by a few mistakes, yet, with the passage of the tests he found the right race pace and took home a second absolute position and precious points for the economy of the championship. Erik Willems confirmed himself to be the third best driver of the 24MX Round #3. A day not up to the previous one that of the Belgian, who experienced the tiredness accumulated in the previous day, also due to a physical fitness still not 100%. This third position allows him to still hold the league leader table in his hands.

Eero Remes: “I’m happy with how I drove today! I made some mistakes in the second Enduro Test and I had to push a bit but in the end I still managed to win both the class and the absolute victory again”

Daniel Mundell: “Day 1 was a day to forget. At the first special landing long by a jump I compromised my front wheel and was forced to finish in advance my race. Today, however, despite some initial mistakes, I was able to finish the special tests with excellent times. In the economy of the championship this victory is precious. Now all that remains is to focus and think about the final in Germany”

Erik Willems: “This second of the race day was positive, even if not up to yesterday. This type of terrain and special stages are completely new to me, so I struggled to find the right way to interpret the special stages. In the Airoh Cross Test I felt at home, my origins as a cross rider helped me. After all, I’m happy with the result since even today I brought home precious points that allow me to maintain the leadership of the championship“ 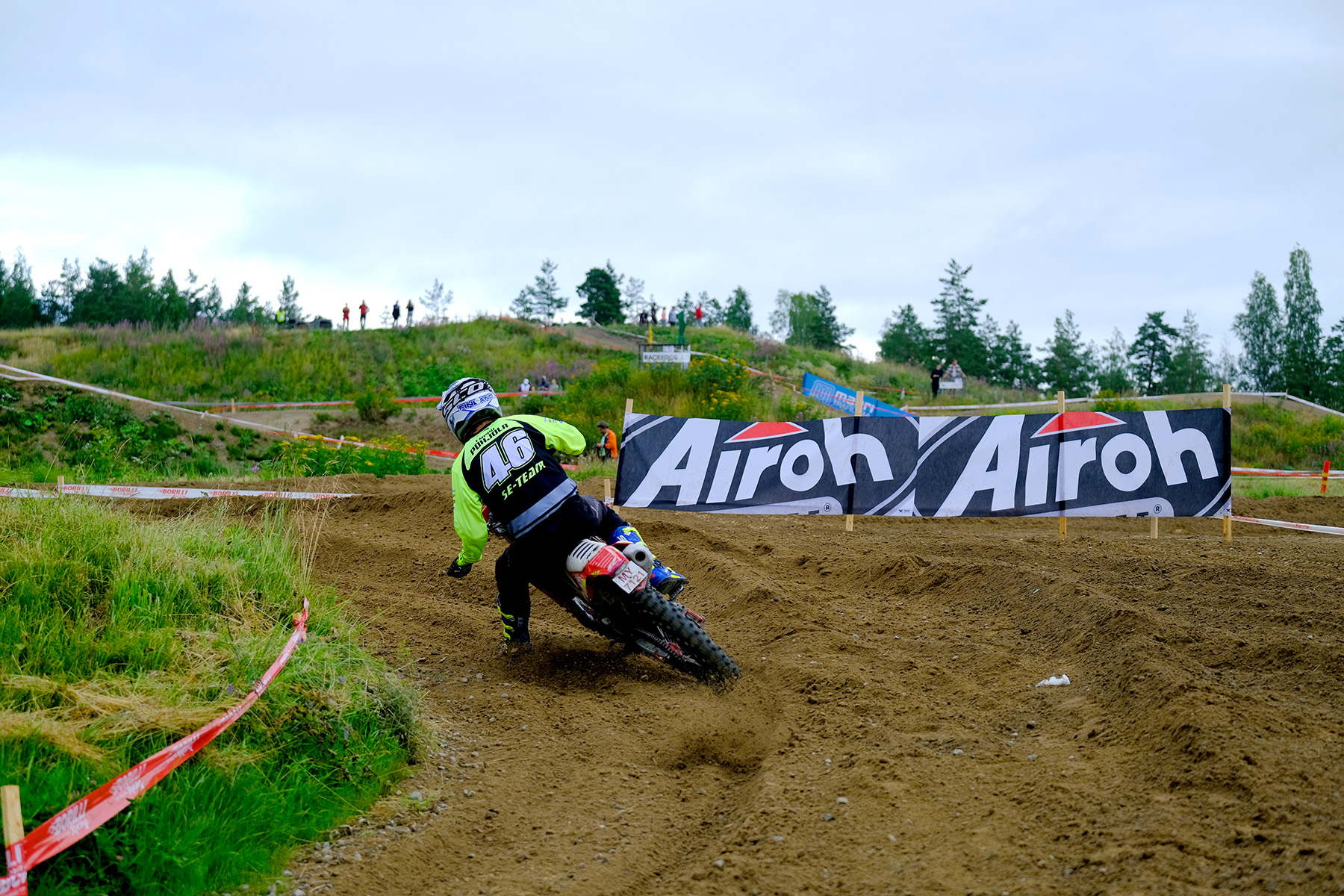 Clement Clauzier confirmed himself as the winner of the Youth class, also on the day 2 of the race he turned out to be the best rider in the class reserved for young people. Pietro Scardina tried to impose himself on the Frenchman but his efforts were rewarded “only” from a second position. The Italian gets on the podium of this championship for the first time and does so in front of the Championship Leader Manuel Verzeroli, who had to climb the ranking of his class. For the Italian it was an uphill day that in the end earned him the third step of the podium. In Junior 1 it is the championship leader who takes home the victory of the day; Carlo Minot is on the first step of the podium and puts behind him the French Killian Lunier. The LLM Racing Team driver finished second, demonstrating his worth and relegating day 1 winner Hugo Svard into third place. Peetu Juupaluoma confirmed himself as the best driver of Junior 2; the Finn repeated the brilliant performance of Day 1. Lorenzo Bernini improved and reduced the gap from the winner, Yuri Quarti also managed to advance one position in the standings compared to day 1 and took the third position.

Eemil Pohjola confirmed himself as the fastest of the E1, another excellent performance, which also earned him the title of Finnish champion, class E1. Maurizio Micheluz tried to be faster than the home driver but he could do nothing and finished in second place ahead of Marcus Adielsson, now third. The victory of the overall class also led Eero Remes to win the E2 class ahead of the Belgian Erik Willems. The third position of the day is once again the prerogative of Nicola Recchia. Daniel Mundell resumed a well-deserved payback, taking home the victory of the E3 class, the withdrawal during day 1 did not discourage the English driver who imposed himself on the Finn Antti Hanninen and the Belgian Dietger Damiaens. Marko Tarkkala confirmed himself as the best driver in the Senior class, Alessandro Rizza tried to be faster than him, however Tarkkala is not an easy opponent to beat. The Italian rider returned home with a second position and with championship leadership still in his hands. Martin Gottvald finished third in Senior Class. Norwegian driver Vilde Holt had a day to remember, she won a European Championship Day for the first time. Nieve Holmes finished in second position with the championship leadership still firmly in his hand. Ella Bengtsson took the third position. Diligenti Racing riders were able to realise excellent performances and gave the victory of the Trade Team class to their team. Lake Iseo is in second place while like yesterday, at the end of the podium we find Sebino. 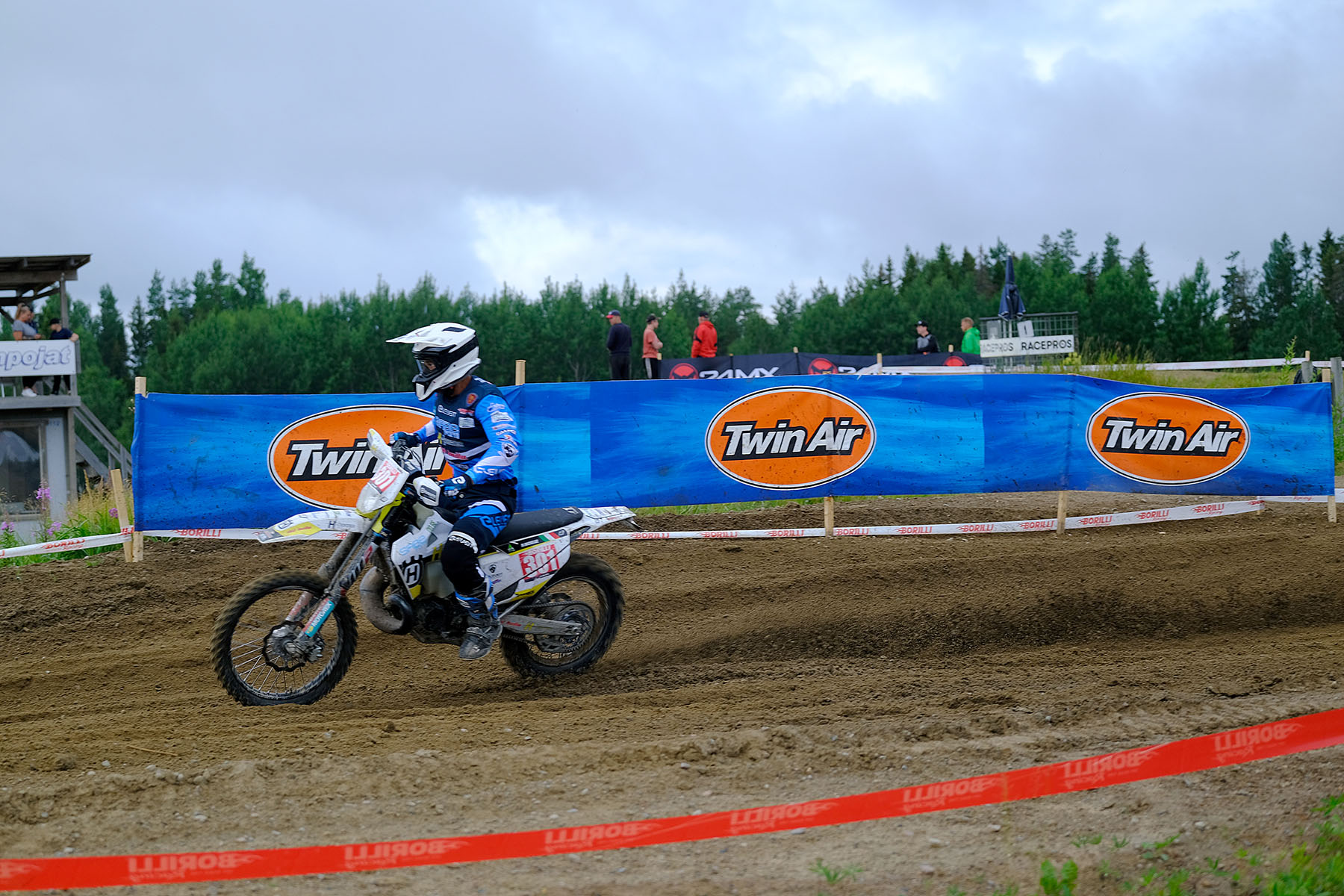 Erik Willems once again confirmed himself as the winner of the Airoh Cross Test Trophy, also during this round the Belgian driver was the fastest in the Airoh branded Cross Test. This further success brings him closer and closer to winning the final prize. Eero Remes managed to find the right key to reading the Elveit Enduro Test and took home the victory of the Eleveit Enduro Test Trophy.

The Borilli Enduro European Championship 2022 respects the role of ambassador of peace and friendship among peoples with the delivery of the special plaque to the organising motoclub. As with the previous two Rounds, a special award was also given on this occasion representing this important role. 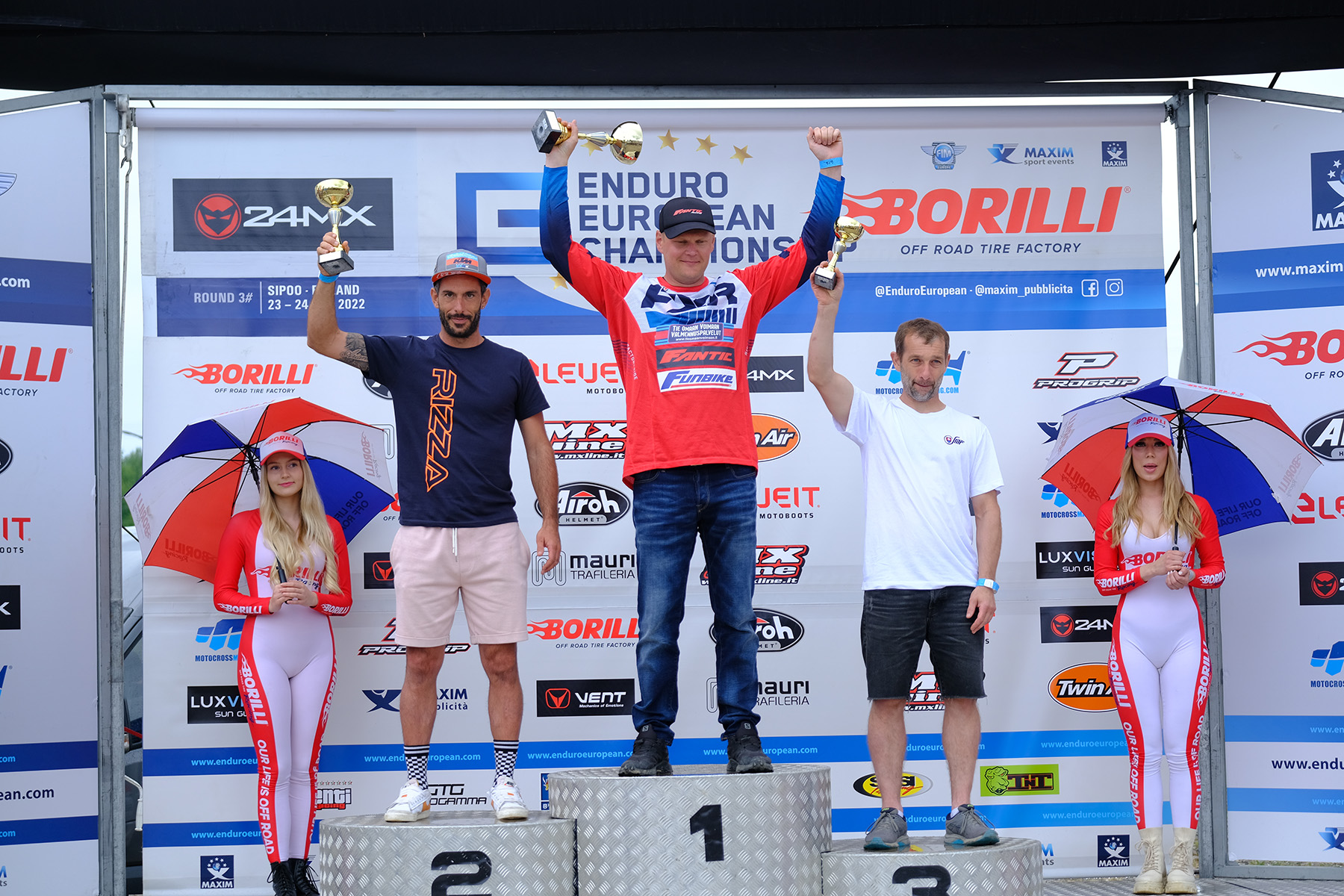 The Borilli Enduro European Championship 2022 has exceeded its half, at its end only the Airoh Round #4 is missing, which with its last two days of race will crown the European Champions for the season 2022. For the moment nothing has been decided yet; all classes do not yet have a certain winner and everything can still change, it becomes of fundamental importance not to make mistakes and stay focussed until the end. The big names of the European Enduro will return to the race on the 29th and 30th of October 2022 in Germany (Rudersdorf). The European Championship of Nations will also take place on the occasion of the season finale. During this long wait stay with us through our social channels and the official website of the championship.