Remes and Pohjola challenge: they are the protagonists of the 24MX Round #3 day 1

Remes and Pohjola challenge: they are the protagonists of the 24MX Round #3 day 1

The two Finnish riders show up on the first day of the Third Round of the European Championship. The multiple world champion, Eero Remes triumphs for only 0.51 seconds over his compatriot Eemil Pohjola. 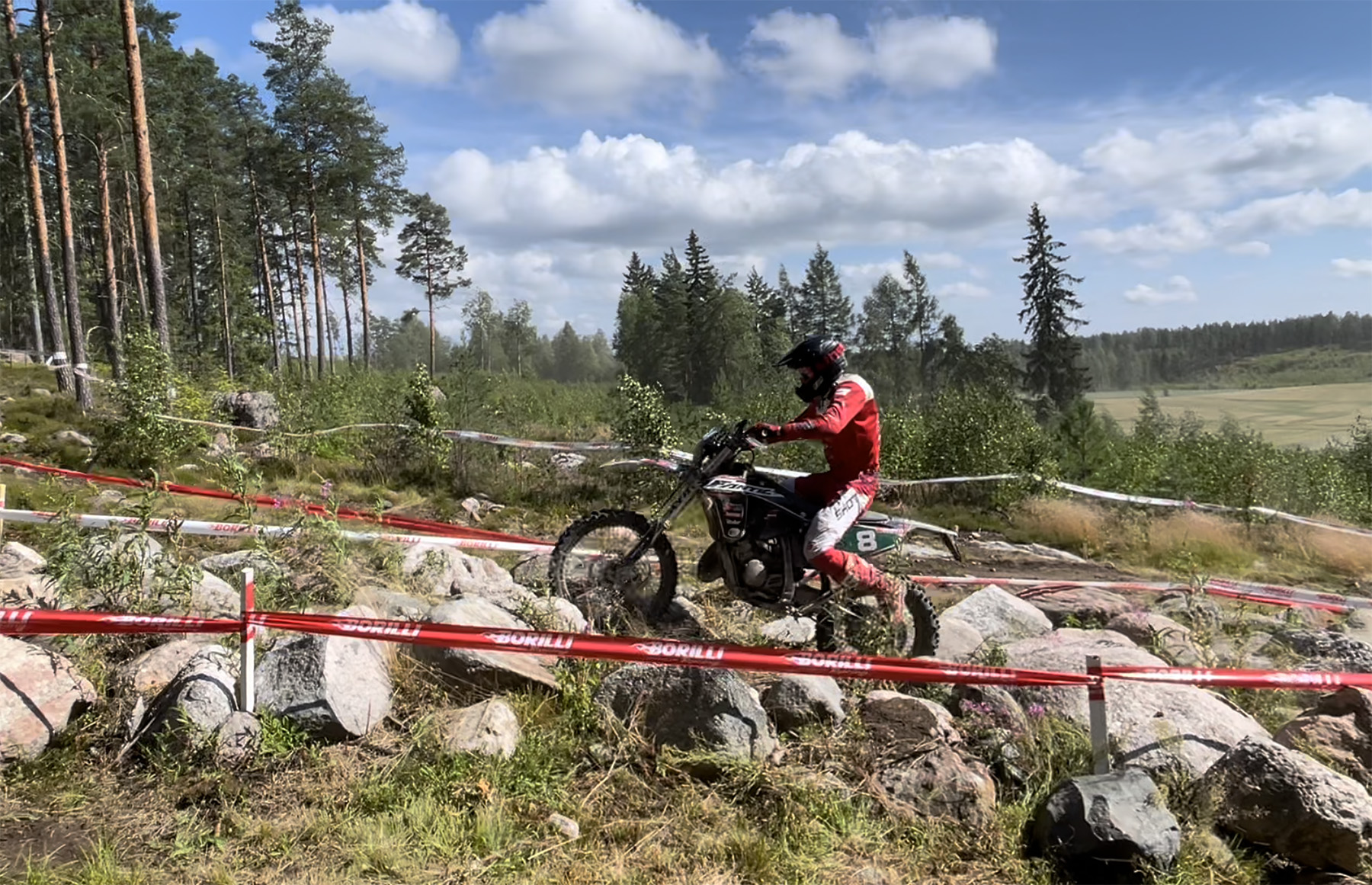 The Finnish town of Sipoo kicked off the 24MX Round #3 of the 2022 Borilli Enduro European Championship on Saturday 23rd of July. In a fine rain and a cool summer breeze, the first of the two Finnish days began. The rain that fell in the early hours of the morning did not prevent the rise of a beautiful sun, which for the first time since the beginning of the season, accompanied the 114 registered drivers. Despite the rain, last-minute changes were not necessary at the special stages, much less to the route.

It was the Airoh Cross Test that started the competition; the test was outlined for a part inside the Sipoo Motocross track, which also hosted the paddock. The alternation between the Motocross track and parts inside a large grass field allowed the riders to show off their speed! Fast and smooth, Airoh Cross Test entertained not only the drivers but also the large audience who rushed to watch the race. The Eleveit Enduro Test, a track of about 8 minutes, developed inside an undergrowth and inside the slope of a hill, was the second test scheduled. At the end of the lap, the 24MX Extreme Test was prepared, a route that contains the peculiarities of the Enduro Test and that at the same time, with its wood logs and stony ground, has proved to be up to the words Extreme. The transfer including the specials with their variety have put all the registered drivers to the test at 360 ° with a total time of 56 minutes for top riders.

The 65 km of transfer challenged the competitors, especially those who are not used to driving in the undergrowth; the few stretches of asphalt and gravel roads proved to be an excellent opportunity to catch some breath and rest in view of the most technical parts. An international race that lived up to expectations, as was the darling Eero Remes; the three-time world champion won all rivals by winning the overall standings. A victory that was not at all obvious; a series of mistakes reported during the first lap and the incredible performance of Eemil Pohjola, crowned Remes winner for only 0.51 seconds. Pohjola, despite the traffic found in the special tests, shone in the home race. In third position with just over 2 seconds behind we find the Championship Leader Erik Willems; the Belgian rider gave his best today, fighting against a physical fitness not 100% and with a few too many mistakes. 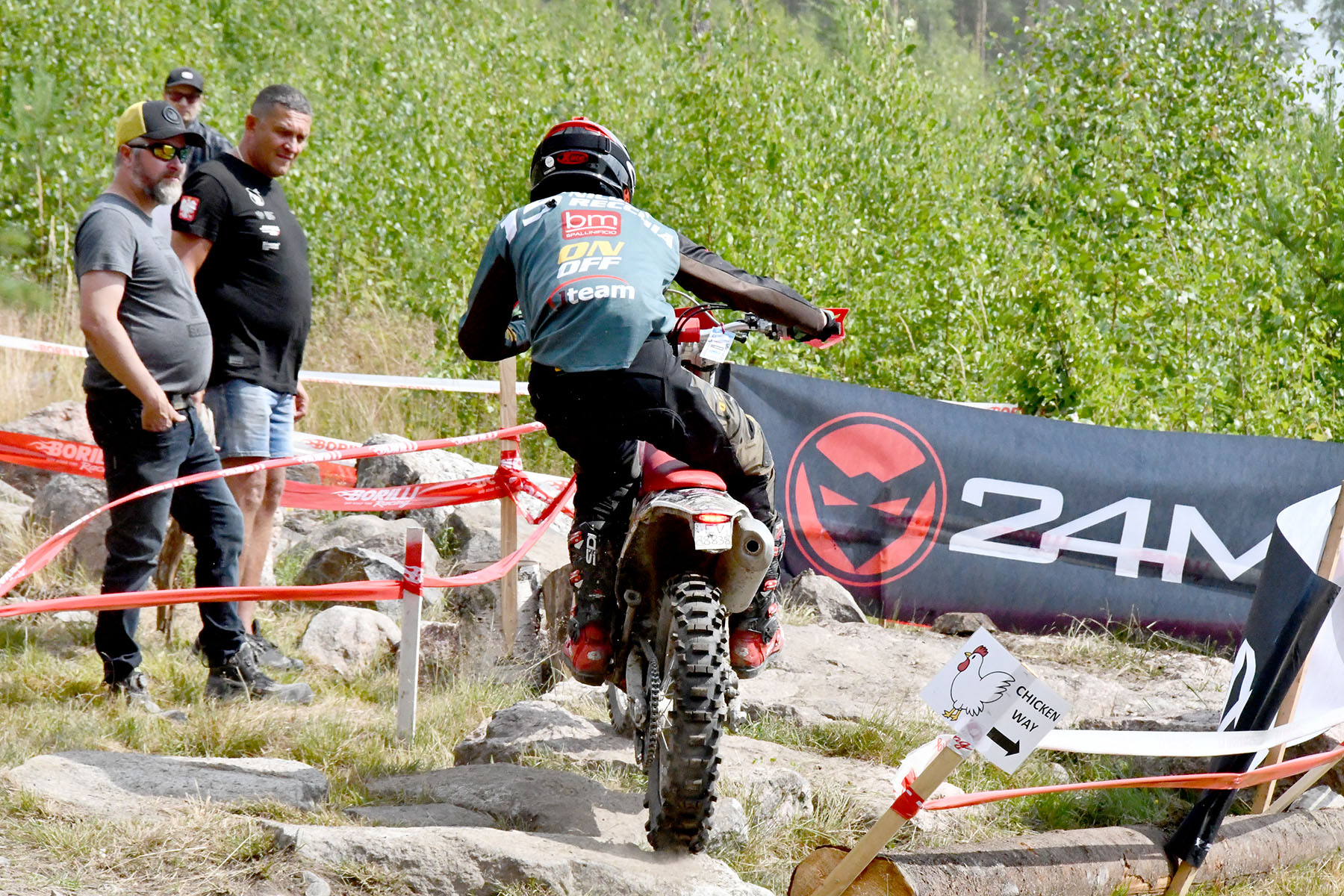 Eero Remes: “I’m happy about my race. During the first lap I struggled and made some trivial mistakes, but in the end I managed to find the right pace and bring home good times. The rain that fell this morning made the first lap very slimy and slippery, during the day the tests dried up and I was able to express myself better. The Eleveit Enduro Test has been the special in which I expressed myself better and also had more fun”

Eemil Pohjola: “It was a good race of mine, I gave my best and I had fun. The specials were all different, the only flaw was the numerous overtakings I had to make during the day. I started behind and I had to make my way but in the end I still managed to realize good times”

Erik Willems: “Today was a positive day for me, despite not yet 100% physically I managed to close the stages with excellent times. I finished third behind two Finnish drivers, who are used to this type of terrain so I’m very satisfied. In the economy of the championship it was a very positive day, the only two drivers in front of me did not register for the whole championship.” 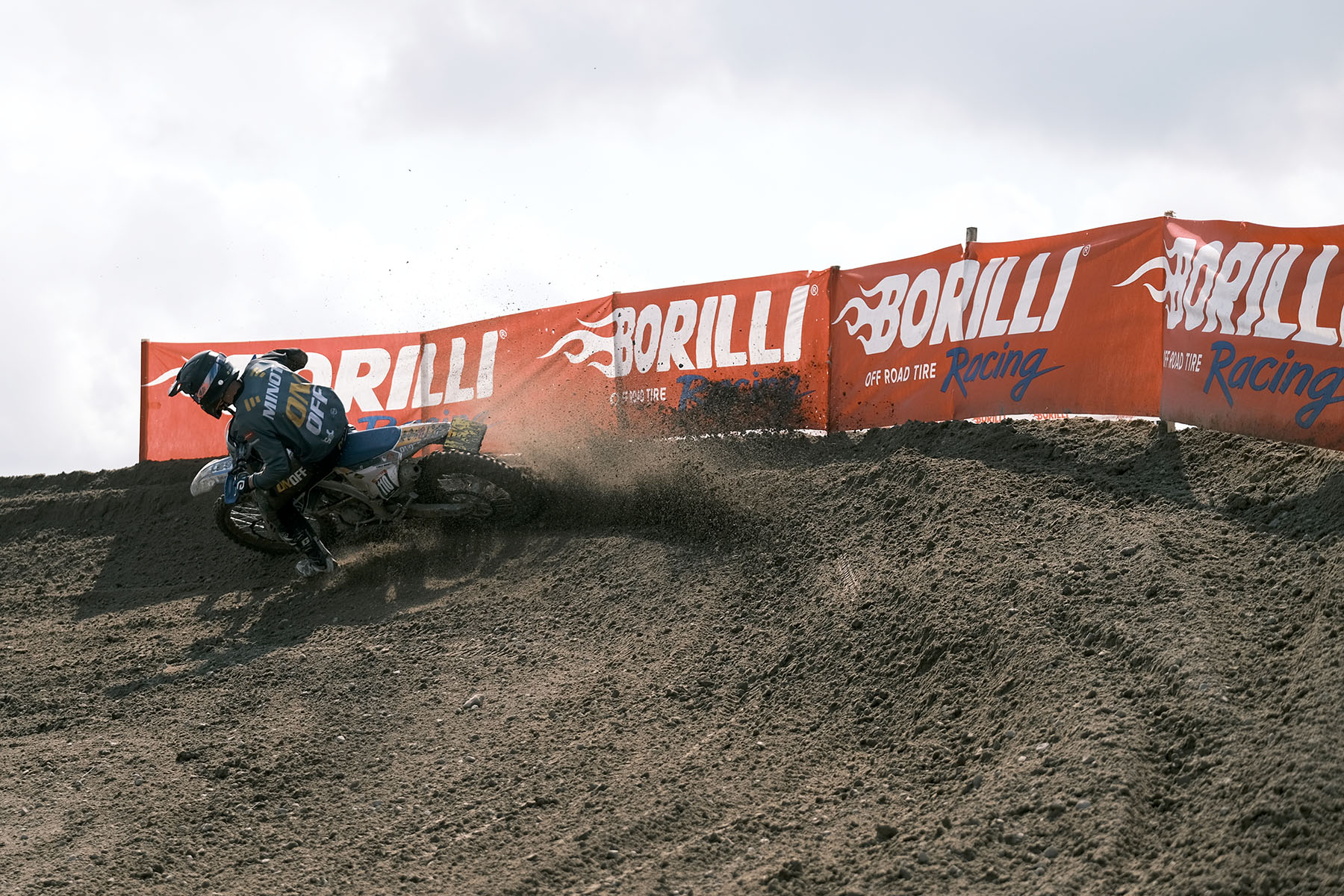 The Youth class saw Manuel Verzeroli and Clement Clauzier compete for the first position; the two young talents fought all day, overtaking each other during all three laps of the race. In the end, Clement Clauzier prevailed for only 3 seconds, who gave himself the class victory on his birthday. Manuel Verzeroli today finished second and confirmed the leadership of the championship, tying Juho Ahokas behind him. Carlo Minot was determined to keep the first championship position in the Junior 1 class and started pushing from the first special stage, however his efforts he did not win the day, which today was won by the Finnish driver Hugo Svard. Carlo Minot finished second and he relegated his direct rival Simone Cristini in third position. Lorenzo Bernini with today’s second position in Junior 2 confirmed the first position of the championship, despite the various attempts the Italian driver failed to be faster than the Finnish Peetu Juupaluoma, who took home the victory with a 2 minute advantage. Jaroslav Kalny, a driver from the Czech Republic who got on the podium for the first time during this season, closed on the third step of the podium.

Eemil Pohjola, after the second overall position, took home the victory of the E1 class. Thanks to a considerable gap he imposed himself on class leader Maurizio Micheluz while in third position we find the Swede Marcus Adielsson. Eero Remes was the overall best driver today and consequently also the best driver in his class (E2); behind him is the Belgian Erik Willems and slightly more detached, on the third step of the podium the Italian Nicola Recchia. The E3 class was won by home driver Antii Hanninen who turned out to be faster than both Frenchman David Abgrall and Belgian Damiaens Dietger. The E3 class sees its ranking changing due to the fact that Daniel Mundell was forced to retire today due to a bad crash during the first special test.

The senior class for the first time sees a different name in the first position. The strong Finnish driver Marko Tarkkala interrupted the series of consecutive victories of the Italian driver Alessandro Rizza, who in any case finished second today. Martin Gottvald arrived third. Nieve Holmes, also on this occasion, turned out to be the fastest woman in the championship; the English girl climbed to the top step of the podium for the fifth time. The second position today goes to the Norwegian driver Vilde Marie Holt, who relegated the French pilot Marine Lemoine into third place. Lake Iseo won the team standings, in second place we found Diligenti Racing while Sebino closed on the third step of the podium. 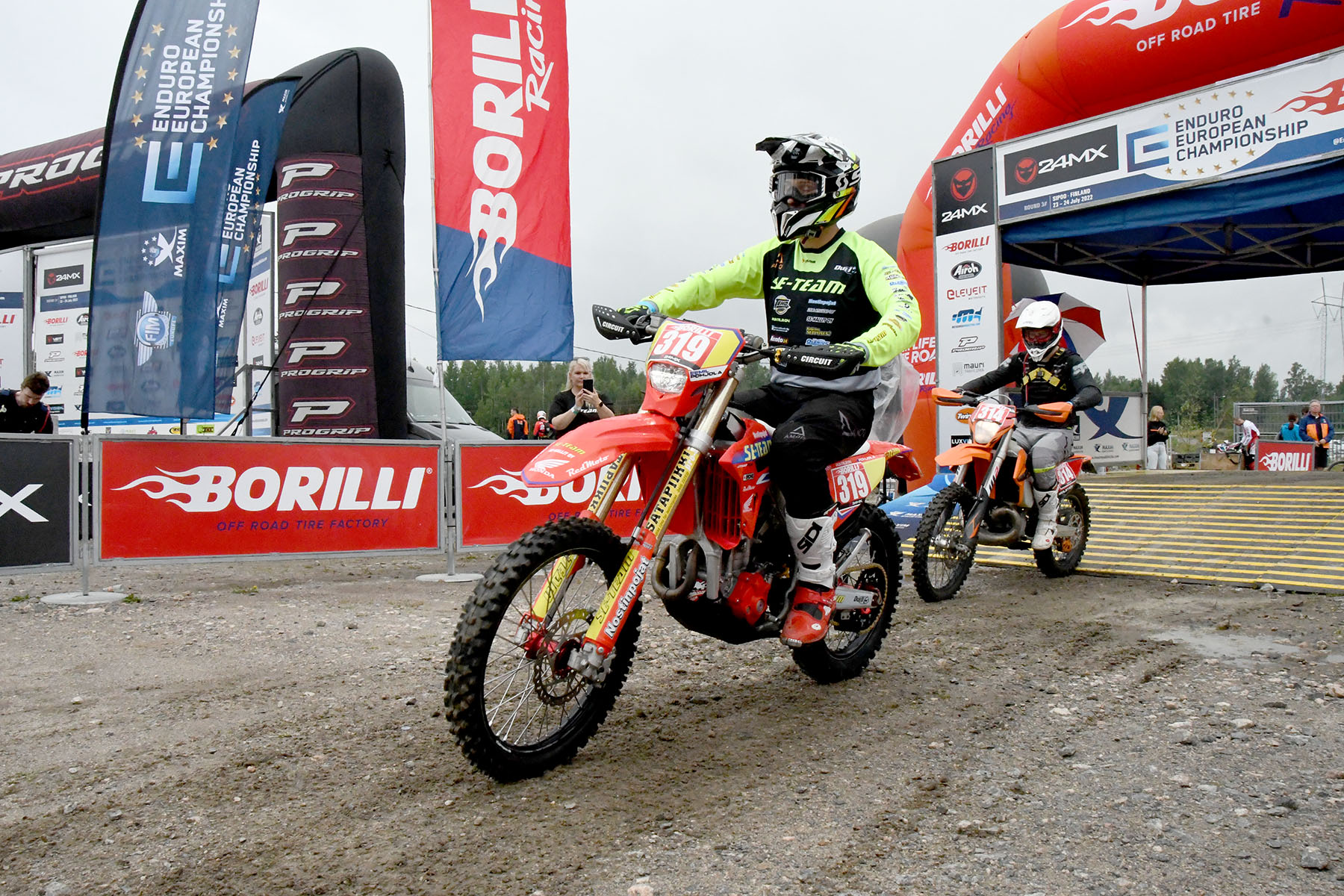 The Airoh Cross Test saw Erik Willems as his best interpreter, the Belgian driver made full use of his cross-country skills and took home the best time in the sector, thanks to this victory he consolidated the Leadership of the Airoh Cross Test Trophy. The Eleveit Enduro Test Trophy sees Eero Remes as its winner, the Finnish driver immediately found himself at ease within this special stage and during the three passages he made the best time in the sector.

The first Finnish day ends with the satisfaction of most of the drivers, the satisfaction for having successfully concluded this first effort is combined with the awareness that tomorrow everything will have to be done all over again. Day 2 will start as always at 9.00 but it will take place on two and a half laps, the last pass to the 24MX Extreme Test will not be made.

Two changes for the Women category for tomorrow; our ladies will only make two laps of the race and a difficult part of transfer between the 24MX Extreme Test and the Paddock will be cut. The new road will be indicated by blue stickers and on the spot there will be some marshals to indicate the correct direction. 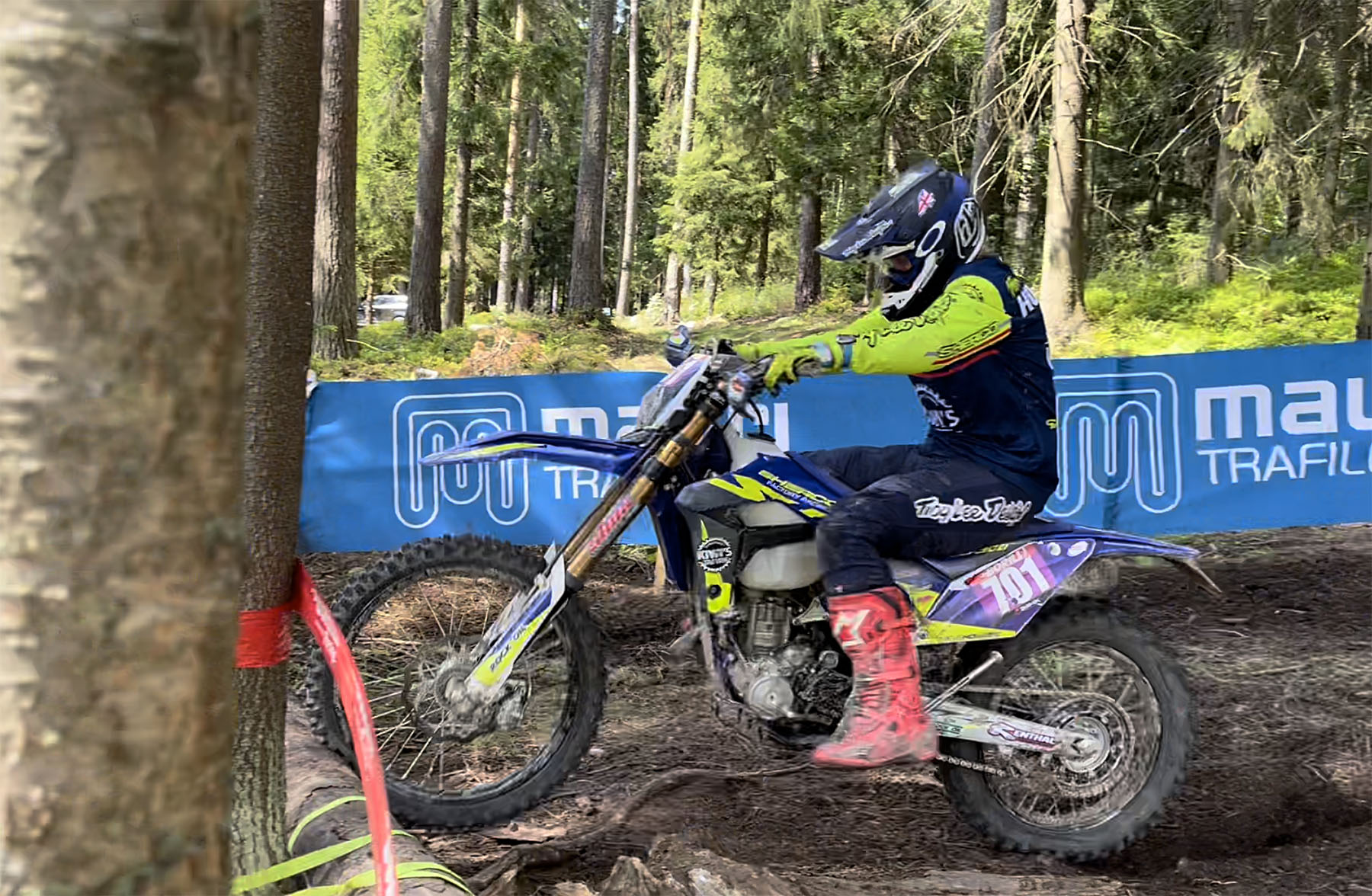 The changes made will not affect the show of the second day of the 24MX Round #3 in the slightest. Keep following us so you don’t miss any updates!